skip to main | skip to sidebar

Whilst we established this record (which we needed to do in order to determine a difference with the post hydrogen installation) we tracked down and ordered a standard hydrogen cell and installed it in the vehicle’s engine bay. We also attempted to track down readymade electronics required to make the cell work efficient (a pulse unit that draws about 2 amps) and eventually bought all the electronic components to assemble it ourselves.

The hydrogen cell installed without the electronics was blowing 30amp fuses and we did not want to draw this much current. No practical solution to limiting the current draw was found. I will go to a TAFE with this problem!
In the mean time we also tried to track down the circuitry required to fool the EFI unit to deal with the excess Oxygen going into the manifold (the Hydrogen Cell produces twice as much oxygen as it does hydrogen!). One solution we had was to space the oxygen sensor away from the exhaust (we have a spacer for this). Doing this would make the car run too lean if no hydrogen is used and the engine may get damaged. An electronic circuit was deemed better which you can switch on or off or regulate in between. This circuitry can be bought via the internet but I was unable to actually obtain it – easier to get Viagra!
As this was happening I searched around for a solution to make a cell which produces no oxygen. This took a few months of experimenting with various components, and I now have one that I believe does exactly that. The oxygen comes out on one end and goes into the air, the hydrogen comes out the other end and is fed straight into the manifold..

The benefit of a small amount of hydrogen in the manifold is that when the spark ignites in the cylinder the hydrogen will immediately explode. This explosion is BEFORE Top Dead Centre which means if it is too big it actually fights against the cylinder which is still moving up. The aim of the small explosion is to fully ignite the petrol mix (coming from the injectors). This has the same effect as buying super duper Titanium sparkplugs and putting a coil on each cylinder. The result is better and more complete petrol combustion, hence more power, and a cleaner emission. Maybe if the electronics of the engine can deal with adjusting engine timing then we can feed more hydrogen in the manifold and go for a bigger cell and maybe gain in power output.
Controlling the current drawn by the cell we can also do by controlling the mix of electrolytic agent in the cell. We tried using vinegar, salt and Caustic Soda. Caustic Soda has a problem in it being caustic and needs careful handling, but it makes for a cleaner running cell (the cell will apparently last much longer and have less built up mineral residues). To maintain a certain concentration of salt (or any of the other electrolytes) is difficult as cells need topping up every 500 kms or so, and trying to regulate voltage with a specific concentration of electrolytes is difficult, hence we like to have an electronically controlled system that allows the cell to draw as much as it is given. This circuit we should be able to adjust to give the cell more or less current, and preferably a pulsed (DC or AC is OK too) voltage.

With the current cell design that only feeds hydrogen into the engine I will experiment in our own car, after I get the current draw issue solved!

CONCLUSION
The Range Rover is going home without a hydrogen cell installed.
I do not think we will make a huge difference in fuel economy, probably 10-15% at best. The equipment required to do this is not easily available – I was expecting the people in this industry would be more able to deliver!

If I can make the cell work on my own car with reasonable results I will duplicate it for our second car and go from there! I am not sure now how it will work on diesel, but people tell me they have good results in large and small diesel trucks.

Posted by Walter at 8:51 PM No comments:

Well, we have been searching and searching, but cannot find good carbon rods. I tried some welding rods to no avail. Sniffing out new sources. Getting a little annoyed how hard it is to try different things and have to wait for months and months to find the stuff you need. The pipes and cyclinders and joints and meters are all asdsembled, just waiting on good carbon rods. Does anyone know where to get thick (5-10cm diameter) carbon rods (50cm long say). We patiently await answer from our next sources. IF anyone has a hint on where to get carbon or graphite rods let me know!
Posted by Walter at 10:34 AM No comments:

We had a little setback with the electronics from Hydrofuelsolutions. They say they mailed the order but it never arrived. Worse is that they tell me they no longer make them for some reason. They were very kind and immediately refunded me the money.

Also, I am fairly certain it is against the law to play with anything that affects pollution, and that would include the Oxygen or MFP censors. The methodology I came up with is simple, I wonder if I should even put it on the Internet here... If it works we can make and add a Hydrogen cell to vehicles a lot easier, cheaper and quicker and not rely on third party gizmos and get better mileage and driving results with standard ULP.

Today I ordered some bits and pieces from Hobby World on line and will keep you all posted once I have a prototype cell producing Hydrogen.

In the mean time we have stopped driving the Landrover as the petrol is way too expensive, and we now have a good fuel consumption indication to compare end results with.

Update from the USA

Currently visiting the USA. Have ordered a MAP/MAF & IAT adjuster from Hydrofuelsolutions.
Hopefully Australian customs will not think it is a bomb!

Troy was driving the Landrover till recently, but has stopped as he has determined a mileage pattern that he is not happy with! It is heavy on the juice. Troy has fitted the cell into the engine bay. We still need to condition it, but we'll do that when I get back from my trip.
Posted by Walter at 11:36 AM No comments:

I have established a mileage record over the last 900 kms of driving; 13.5 mpg (21 liters/100km) in the city and 20.5 mpg (14 liters/100km) on the highway. This weekend the car is going to Troy who is going to also drive it (to and from the town of 'Nook') and start installing the cell. Troy will have the car while I am in the USA (till ealy July). 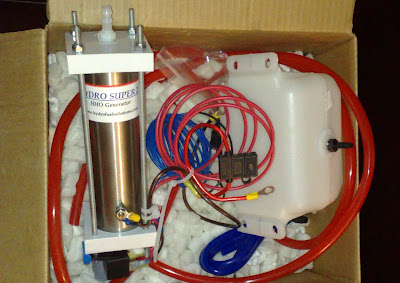 In the mean time I am working on making and buying the electronic circuitry required and now have soldering to do! I have harassed the people at Leading edge for many parts. Maybe Troy will work on the electronics as well. 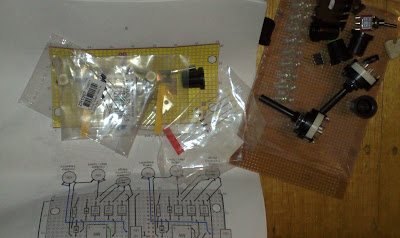 In the USA I might also pickup more electronics for our project.

Posted by Walter at 9:52 PM No comments:

Right now I have all the ingredients to make a circuit board! It may take me a few weeks to get this part right, so I need help! Who has good experience making circuitry? Ideally we can find someone who can whip them up relatively easily as per our (relatively simple) designs till we come up with the ideal circuitry. If we find the optimum circuitry we like to produce a few dozen of these boards as well. Any takers in Tasmania or Australia? If you are a manufacturer we like to hear from you too, even if you are as far away as Taiwan or China!

Contact waterrover at cotu dot biz.
Posted by Walter at 9:58 AM No comments:

I found this information, which is for a slightly different HHO cell structure (tubes), and requires a Stanley Meyer pulse unit... so I can probably not do this myself without having one of those gizmos.. (anyone has one)?

A very important part of the cell build is the conditioning of the electrode tubes, using tap water. This is done as follows:

After the seven steps above, let the cell stand for at least an hour before you start all over again.
You will see hardly any gas generation in the early stages of this conditioning process, but a lot of brown muck will be generated. Initially, change the water after every cycle, but do not touch the tubes with bare hands. If the ends of the tubes need to have muck cleaned off them, then use a brush but do not touch the electrodes!! If the brown muck is left in the water during the next cycle, it causes the water to heat up and you need to avoid this.
Posted by Walter at 2:36 PM No comments:

What wil happen if I add an HHO cell?

Welcome to the Water Rover project

What do you mean Water Rover? Well, what we are attempting to do is improve the fuel economy of this vehicle through putting a small hydrogen cell that creates water and hydrogen and feed it into the engine with the petrol going in. We hope to get a more efficient and cleaner combustion process and hence improve performance or economy.

We are not going to be using rocket science here, we are merely trying to creatively utilise commercially available products to extend the range of one car by 35% or more using various forms of electrolysis - which runs on water and electricity from the car's electrics. Hopefully we will develop a process that works, or else we will at least dispel a myth (the run-your-car-on-water one)!

We are working with a 5 speed manual 1996 3.9 liter V8 fuel injected Landrover Discovery.